Bullet security cameras are a type video surveillance camera that are typically small and shaped like a rifle bullet shell or lipstick case. Smaller bullet cameras are typically the diameter of a cigar, but they are shorter. Sometimes they are referred to as lipstick cameras. Bullet cameras can easily mount to ceilings or walls because most of them use a tri-axis type of mount. Not all bullet camera are small. Infrared bullet cameras tend to be larger in diameter to accommodate the additional space that their IR LEDs require. There are several types of bullet cameras on this page including analog CCTV cameras, AHD cameras, and TVI cameras. The AHD and TVI models are capable of 1080p HD resolution, but require an AHD or TVI compatible surveillance DVR.

An Internet protocol camera, or IP camera, is a type of digital video camera commonly employed for surveillance, and which, unlike analog closed circuit television (CCTV) cameras, can send and receive data via a computer network and the Internet. Although most cameras that do this are webcams, the term "IP camera" or "netcam" is usually applied only to those used for surveillance. The first centralized IP camera was Axis Neteye 200, released in 1996 by Axis Communications. 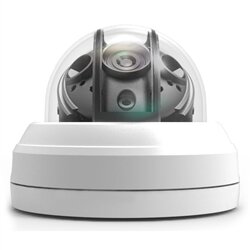 Dome Security Cameras are named for their dome like shape. Dome cameras are commonly used in surveillance systems inside of homes, casinos, retail stores, and restaurants. This is because dome cameras are more fashionable and blend in very well to their surroundings. Because of their dome shape, it is difficult for someone to tell which direction the lens of a Dome Camera is actually aiming. When shopping for a Dome Camera, you should consider if you need night vision, in which case you should look at an infrared dome camera. If the area that you are installing your camera is susceptible to vandalism or tampering, you should consider installing a vandal dome camera. A varifocal dome camera gives you the flexibility to adjust the focal distance of the camera lens to exactly where you need it. CCTV Camera Pros offers combinations of all of the above mentioned types of Dome Cameras.

All in One | Desktop Repairing in Pune | Tally Dealership in Pune

MY IT | printer & scanner in Pune | desktop repairing in pune

Consulting | Event Renting in Pune | Customised IT Solutions in Pune

MY IT | Services | Corporate Renting in Pune

With crime increasing and burglaries very common place, it is very important to consider the available security options and choose one that is the best fit for you. One of the most popular and cost effective ways of providing security in the home and place of work is with cctv cameras and equipment.

MY IT, a Pune-based firm, has today established itself as a leader in providing various IT enabled hardware services. It is the result of strategic years of chiseling of technology, to serve the ever growing stringent requirements of the industry’s IT requirements.

This email address is being protected from spambots. You need JavaScript enabled to view it.